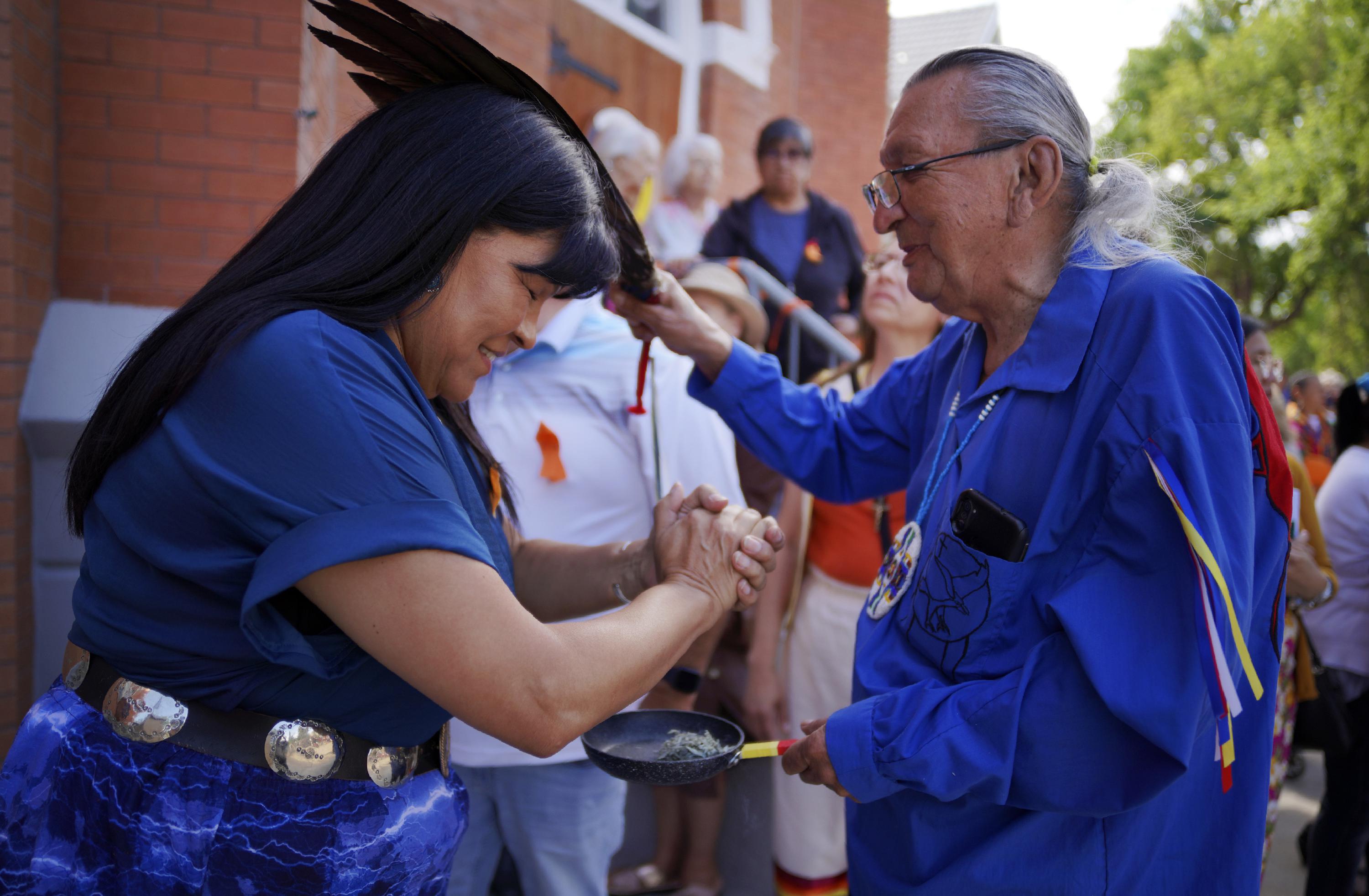 MASKWACIS, Alberta (AP) — To this day, Flo Buffalo does not drink milk — not since two nuns force-fed her the sour milk she refused at the Catholic-run Ermineskin Indian Residential School for Indigenous children she attended in the 1960s.

She stretched out her right hand, showing that she had never been able to fully straighten it since a nun brutally beat her with a stick.

With international attention focused on the former school in the prairie town of Maskwacis while Pope Francis visits Monday to apologize for abuses in a system aimed at segregating local children from their tribal, family and severing religious ties, Indigenous Canadians like Buffalo express a range of skepticism, caution and hope.

Buffalo, a member of the Samson Cree First Nation of central Alberta, doesn’t often talk about her two years at school. But ahead of the Pope’s visit, she sat down to share her experiences with Associated Press journalists and a small group of teenage girls who are learning about the schools’ traumatic legacy.

Speaking at the council chambers of the Montana First Nation, a neighboring Cree tribe where she now works, Buffalo recalled how the nuns, who were white, would hit the girls if they spoke Cree instead of English in their homeland .

At the same time, Buffalo, 67, said she often defied the nuns. “I scared her to death because I couldn’t stand her…” she said, finishing with a mischievous chuckle.

Buffalo still considers itself Catholic. But she won’t be attending Monday’s event with Francis – she doesn’t want to deal with the crowds and those she blames are the nuns who abused her and never apologized in her lifetime.

“He shouldn’t apologize,” Buffalo said. “You should be.”

When Mavis Moberly heard the pope was coming, the news triggered some of the trauma she carries from her years at a boarding school in northern Alberta. But after tears, prayers and a traditional incense ceremony, a purification rite with fragrant plants, she looked forward to the Pope’s apology.

“Maybe it will help me heal and find a little more inner peace,” she said after last Sunday’s service at Sacred Heart Church of the First Peoples, an Edmonton Catholic congregation aligned with indigenous peoples and culture .

The papal apology is years, if not generations, in the making.

From the 19th century through well into the 20th century, the Canadian government worked with Catholic and Protestant churches to operate boarding schools in a “nominal education system” designed to weaken tribal identities and aboriginal resistance to land grabbing , according to a 2015 report the Truth and Reconciliation Commission of Canada.

It identified 139 schools, mostly run by Catholics, to which about 150,000 students were sent. “Children were physically and sexually abused,” the report said, adding that schools were unsanitary and unsafe facilities where thousands of children died from disease, fires and other causes.

For decades various Catholic and Protestant church groups have apologized, and Pope Benedict XVI. expressed his “personal concern” in 2009.

Pope Francis met with a Canadian indigenous delegation this spring and apologized “for the deplorable behavior of members of the Catholic Church” involved in the schools. He also followed calls from survivors for an apology on Canadian soil, leading to Monday’s event, which is expected to be attended by thousands.

Today the Ermineskin boarding school has been largely demolished. In its place stands a newer set of school buildings operated by four Cree nations in and around Maskwacis. A large tipi in front of the secondary school demonstrates how educators encourage pride in the once oppressed indigenous culture.

Rose Pipestem, a member of the Montana First Nation who is also an Ermineskin school survivor, said she will try to see the Pope. But like Buffalo, she believes the perpetrators should have apologized.

“I’ll visit him,” she said, sitting in the council chambers next to a row of photos of former Montana chiefs. “I’m not mad at him.”

Pipestem has no conscious memories of being abused at school, where she has lived since she was 3 years old after the death of her mother. But years later, a classmate told her that a nun beat her until she bled for not completing her work at the blackboard quickly enough.

“It just shocked me,” she said through tears.

Pipestem has not filed a claim for damages because she has no memory of the incident. But she knows there has been abuse at the school.

“I’m always grateful that I’m still around,” she said. “I think it kind of made me stronger.” She reached a point where “I didn’t believe in the Catholic religion. Why did they allow all these things?”

Other survivors have found spiritual solace in Catholicism.

Worshipers thronged Sacred Heart on Sunday to rededicate the shrine after a fire. The newly restored room features large wooden beams in the form of a teepee above the altar and impressive images of Jesus and his followers, depicted with indigenous characteristics.

Drummers accompanied a procession into the church, followed by a multicultural mix of musical styles and a liturgy in English and Cree.

“This church was part of my healing journey,” said Moberly, who has been there for many years.

She said that as a young adult, still traumatized by her school experiences, she rejected the Catholic faith for a time, turned to drinking and made poor choices. But when she became a grandmother, she decided to change and set a strong example for others.

Church elder Fernie Marty, 73, said Francis’ visit will not only bring reconciliation but encourage what he calls “reconciliation action.”

“We are all helping to ensure that atrocities like this never happen again on Canadian soil,” Marty said.

Edmonton Archbishop Richard Smith said the Pope’s visit sends a message not just in words but in deeds as he comes to Canada despite canceling other trips due to health issues.

“This shows… how important it is for him to personally demonstrate his personal closeness to Indigenous Peoples,” Smith said.

The Associated Press’s religion coverage is supported by AP’s collaboration with The Conversation US, funded by Lilly Endowment Inc. AP is solely responsible for this content. 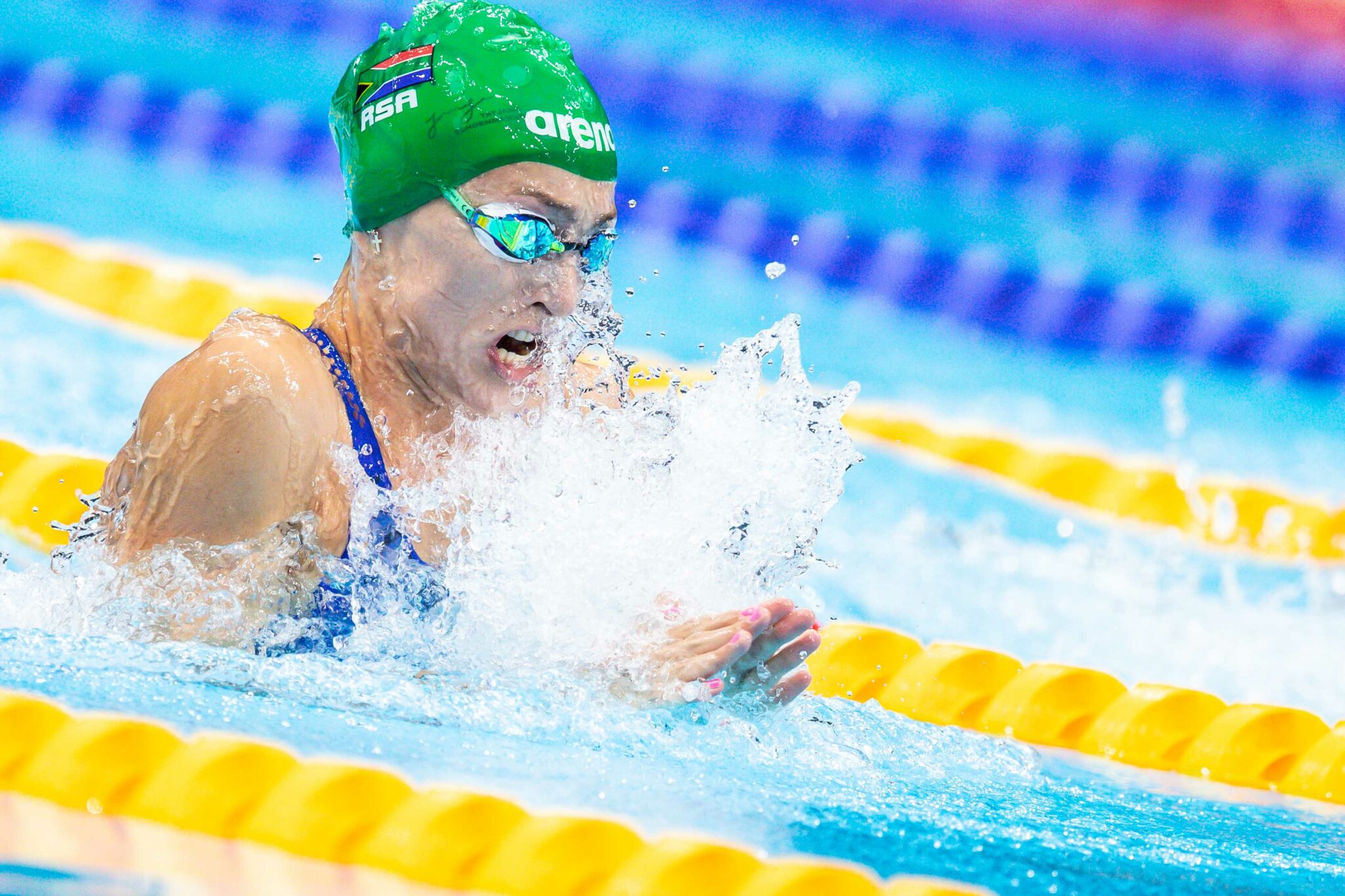